The hype around the beyond brilliant ‘Stranger Things’ franchise may have died down since it’s release in July, but when Lucky Chip announced a menu themed around the series I was gagging to experience it.

Based just a short walk from Dalston Kingsland train station, Lucky Chip screams classic hipster joint – so it seems fitting that it would be the place to hold such an event. The menus were impressive in themselves, presented in the form of an old school VHS box, boasting such treats as ‘Eleven onion rings’, ‘Stranger wings’ and the ‘Hawkins High snack box’.

We ordered a burger each; one being the ‘Eggo waffle burger’ that in a tribute to the buzz-cut-beauty used waffles in place of buns. I opted for ‘The Demogoron burger’, which was a super tasty gorgonzola filled beef patty with candied bacon-pickled onions. Thinking about it now is literally making me salivate! The fries we ordered were a tad underwhelming though, with the cheese fries simply having a handful of cheddar partially melted on top. ‘Eleven onion rings’ on the other hand were amazingly greasy, crispy and all things good onion rings should be.

Hidden down Ridley Road Market, you’d easily stroll past Lucky Chip if you weren’t paying attention. The dimly lit diner was the perfect setting to emulate Stranger Things, with dark brick walls, deep wooden furniture and retro light fittings. Coloured Christmas lights lined one of the walls, which became the perfect backdrop for photographs – and my brother even brought along some fairy lights to use as a prop (A+ for effort!). Sadly my nice camera is currently broken, so I had to rely on my phone to grab a few snaps. There was probably more that could have been done to aid the theme interior wise, but I guess it’s the subtle hints that make the novelty great.

Lucky Chip’s Stranger Things menu is only available until the end of October, at Lucky Chip Dalston as well as at The Old Queen’s Head in Islington and Camden Assembly. So try and get down there asap before – like Barb – it’s gone forever… 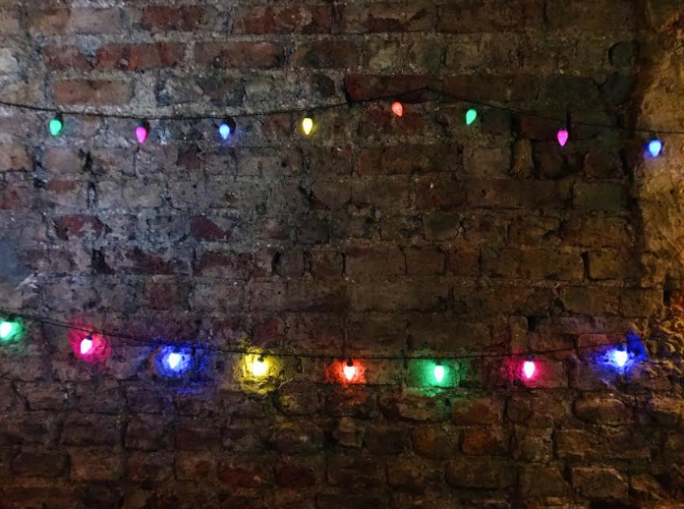