At the end of our Lego-Exhibition day out last weekend we fancied some dinner and decided on fail-safe Pizza! There’s a Franca Manca near us, in Southfields which I was desperate to try as I’d still never been; but heard so many good things about. On the way there, we walked through Brick Lane and hopped on the tube to Somerset House, as there is currently a Chris Stein punk photography exhibition on. Sadly I wasn’t allowed to take photo’s inside, but I would recommend popping along, as it’s free.. also the photo’s are quite cool, with loads of Blondie looking an utter babe. The ice rink was still at Somerset House looking beaut all lit up pink, and a massive Christmas tree which was a bitter reminder that Christmas is over! Boo. 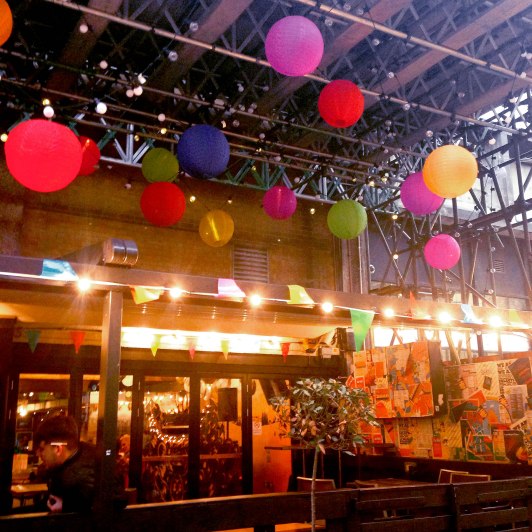 So onto dinner. Franco Manca is a sourdough pizza joint with locations all over London, which have a very small but tasty menu. Lucky for us there’s one in Southfields near us so we popped in on the way home. The restaurant is a short walk from the station and feels very homely but modern inside. I know sometimes when a place has a massive menu it can be a bit off putting as there’s too much choice, but with FM’s I kind of found the tiny menu had this effect on me. With no starters (only ‘specials’) there were only about six pizza’s to choose from, food wise. They don’t even do puddings! No pizza immidately stood out to me, but I went with one with ‘wild broccoli, mozzarella, gloucester old spot hand sliced sausage’, and asked for it to be on a tomato base, instead of the white pizza it was. I’m a serial offender for ordering off-menu, or asking things to be changed slightly with my food (meh) but the staff were more than happy to accommodate my diva demands..so that was good.

We also ordered a ‘special’ to start with, which turned out to basically be some sausage in a tomato sauce and cheese. It tasted good, but was hella random and not what we expected when it came. I did order a delish organic lemonade though, and it came in such a cute bottle (wish I had stolen it for the flat!). When the pizza’s arrived they looked impressive, with them being huge and all, but I instantly had food envy with the boy’s chorizo pizza, as my sausage one looked a bit scary, and the ‘broccoli’ appeared to be more like spinach(?) Hmm. I ate most of it anyway (of course). It was tasty, and didn’t feel too heavy and the meal only cost us around £11 each.. this is probably because we had a minimal amount to order. I wouldn’t rush back to Franco Manca any time soon, I just wasn’t blown away by the experience. When I do go back I may have to sneak some Pizza Express dough balls in my bag before hand!