Working for TV magazines has slightly ruined my TV experience, as more often than not I will read spoilers or future plot lines for a TV show weeks in advance; therefore ruining the show for me before it’s even gotten started! There are many perks though of course – like knowing when exactly a show is coming back, and knowing line ups, and behind the scenes info about all things TV. There are many shows that I have loved coming back on screens this January, or have already started. I just wanted to share my thoughts with them so far, and if you haven’t watched any of these before maybe I can persuade you to give them a watch, and who knows; you could become as obsessed as me. Warning: Spoilers ahead! 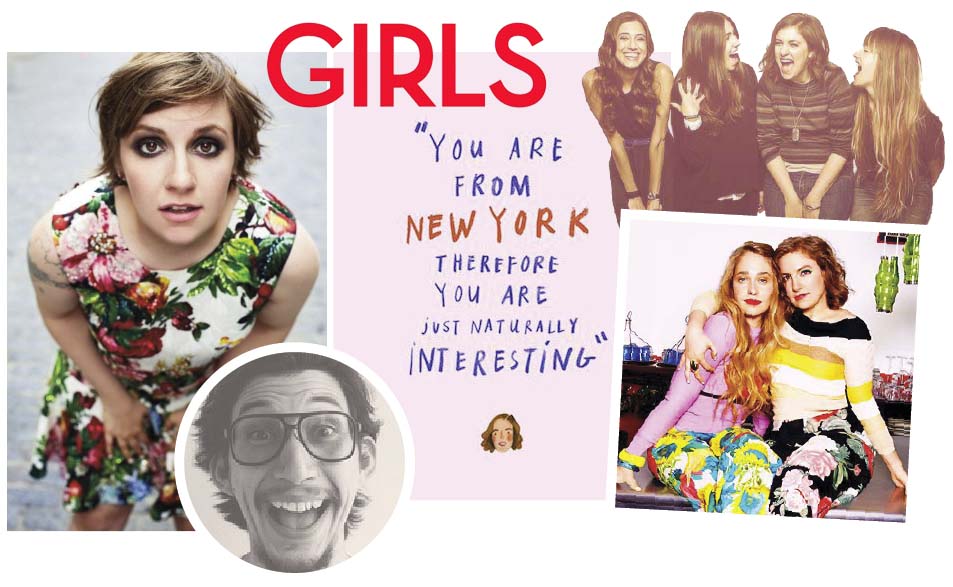 GIRLS// I absolutely loved Girls when it first came out, but the seasons since have become a bit..meh, and have nothing on the first season which was hilarious, gritty and interesting. I just find it annoying to watch sometimes, with Hannah becoming more and more self-obsessed, and her friends acting out of character, well atleast that’s what I thought. I do enjoy watching the show though despite this, and as a sufferer of severe fear-of-missing-out, I promised myself I’d watch the fourth season too. Episode one was on the other night and while very short (20 mins?!) it basically got you back into the swing of things and brought you up to date with what all the characters are up to. Marnie is still such a dick – I seriously hate this girl, she is SO annoying. Jessa is still cray-cray looking after some old woman who she tried to assist in a suicide-gone-wrong, Shoshanna is still quirky, being awkward around Ray and Hannah is still only thinking about herself.. I cannot believe she didn’t even say bye to Adam before she left for who knows how long?! Not cool Han. I’ve got high hopes for this season as since Girls last finished I’ve become slightly in awe of Lena Dunham. I read her book which I thought was great, and I just think she is a good role model for ‘the ladies’, yuh-know.
Watch it for: Shoshanna’s outfits, funny one liners and Hannah’s boobs. Just kidding about the boobs.. although they’re everywhere.
Ignore it if: Whiney middle-class girls aren’t your thing. You get creeped out by girls talking about gross things so openly.
The Eye Candy: Adam of course. Oh my, he is a god. Very upset he shaved his beard off though!
Why it’s worth watching: It is funny, and clever. It’s like a younger more obscene Sex and the City. 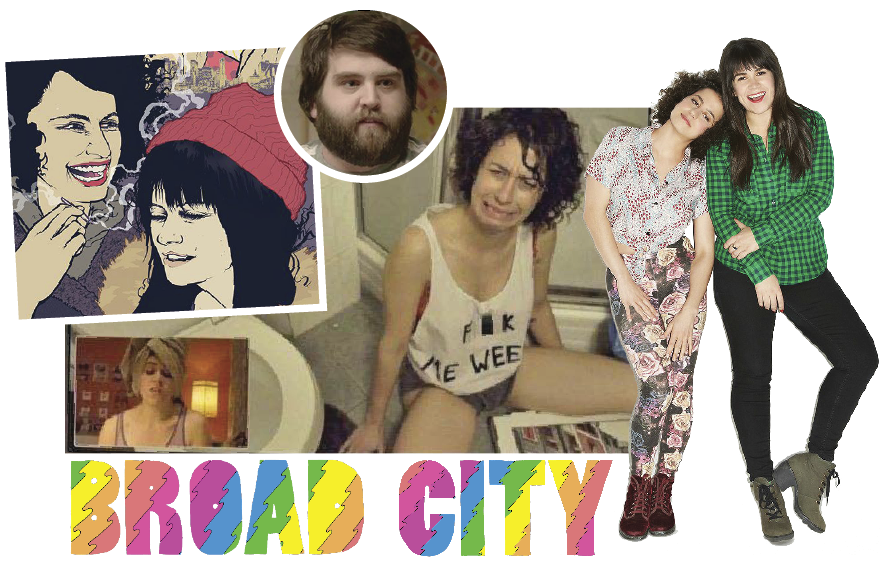 BROAD CITY// I’ve spoken before about Broad City and how utterly amazing it is. Well it’s back this month for season two aghhhhhhhhhh, I am so excited! AND season three has been confirmed for the future too (victory dance). Re-watching old episodes has given me Broadders fever, and although season two hasn’t started yet, I’m 100% sure it will be just as hilarious as the first one. The fact that this show started off as silly webisodes by Ilana and Abbi makes me root for their success even more.
Watch it for: Laugh out loud moments, and physical cringing.
Ignore it if: You are squeamish and don’t find bodily functions funny.
The Eye Candy: ‘Jerrrrammmmyyy’ or Bevvers, he’s a secret stud I’m sure.
Why it’s worth watching: The show is so quotable, and you can re-watch episodes over and over with them still being funny. 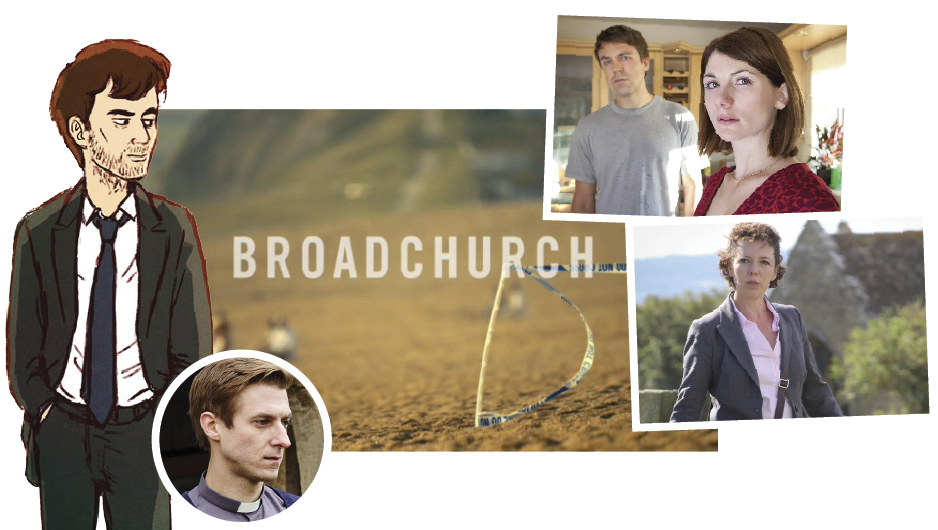 BROADCHURCH// I was in love with Broadchurch when it first aired last year, and to be honest I think everyone was pretty much hooked. When they announced it was going to be back for a second series, I’d have thought it would consist of a new case, but by everyone’s surprise they have actually focused this series on the aftermath of Joe Miller’s arrest. Which is… interesting.  I mean the fact that he might get let off for his murder of Danny is a bit farfetched, but then again if he was found guilty, series two would only consist of one episode! So far series two has been a bit slow paced, but I’m sticking with it as I’m sure it’s going somewhere. There are new characters such as the two lawyers (the old woman is so aggravating and rude!) and this whole storyline with the lady that Alec is trying to protect. Although Olivia Coleman is a babe of an actress, she does play the same character a lot; but I feel sorry for Ellie, who’s getting a lot of grief from Beth. Episode two saw Beth wet herself; she was so angry at Ellie! …Or was that her waters breaking..?
Watch it for: Suspense, plot twists, and beautiful beach scenes. I seriously want to skip along that beach.
Ignore it if: You get distracted easily, as the episodes are quite long and slow.
The Eye Candy: The sexy vicar..oh hay!
Why it’s worth watching: If you watched the first series you pretty much have to watch the second. Otherwise you’ll never know if justice is served!

MARRY ME// Marry Me is new in the UK and coming to E4 very soon, I’ve been watching it online and would recommend it. The show focuses around a group of friends, two of which (Annie and Jake) have just recently gotten engaged after years of being together. As much as I don’t believe in Annie and Jake as a real couple (I have not warmed to him!), I do like the dynamics of their group of friends though. ‘Gil’ is played by the same actor as ‘Bevvers’ in Broad City – so naturally I love him even more..in the group there’s also a sassy lesbian Kay and ditzy blonde Dennah, as well as Annie’s two gay dads – one of which is played by the Principal from ‘Mean Girls’! It also seems none of the characters have day jobs…seriously all it seems they do is go for brunch? I was going to say ‘I highly recommend it’, but it seems the episodes get better or worse depending, week to week. At some points I have been crying with laughter, other times I’ve found myself making cups of tea instead of paying attention. The show just follows their shenanigans day-to-day, with humorous consequences and funny references. It’s easy to watch and something you can pick up and drop whenever suits you!
Watch it for: Dennah’s fashion sense – that girl has got style!
Ignore it if: You’re sick of ‘another sitcom’ about a group of friends getting up to craziness.
The Eye Candy: Hmm, that’s a toughie.
Why it’s worth watching: If you’ve enjoyed Casey Wilson (Annie) in shows like ‘Happy Endings’ and SNL, she will not disappoint. 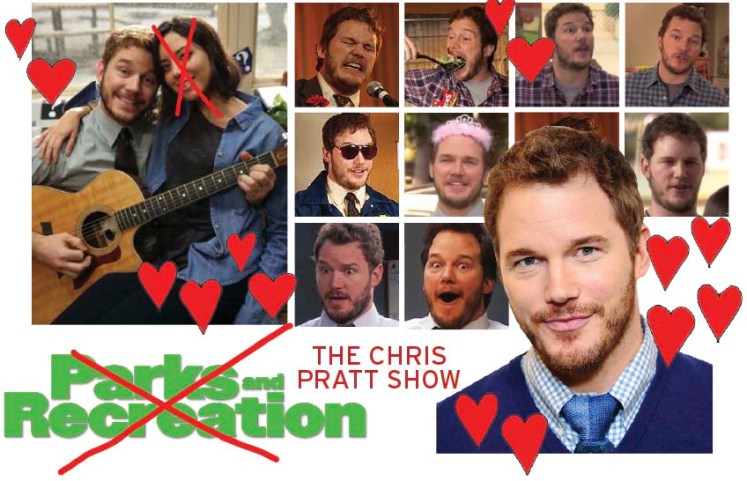