Being afraid of heights, I only ever venture vertically for a good cause, and the Sky Garden in London was definitely worth the fear. Based on the 34th floor of the ‘Walkie Talkie Building’, the Sky Bar boasts incredible views of London – in particular of the Shard, but the real attraction is the living garden that lies inside. The Sky Garden is free to visit, but you do need to book a time slot via the website, as it gets pretty busy. Running late (stupid Waterloo & City line not running on Sundays!), we were soon shooting up in the lift and went straight to the balcony to admire the view. Being so close to my work, I thrilled everyone by pointing out my office building (joy) and you really could see for miles. It sounds mega cheesy I know, but when there are so many tourists in awe of the city it’s moments like this I realise how lucky I am to live so close to London and to be able to do these things so close to home. Go south-west trains!

Inside we had a little wonder around and climbed up the side of the garden, to view more of London. Having all this nature in the modern man made structure made such an interesting contrast, and teamed with the bar inside made for a pretty cool place to spend a Sunday evening. We ordered some fancy cocktails, that weren’t actually too expensive for London prices, and the boys got some beer and cider. Jenny is an amazing food stylist by trade, so she managed to take a beaut pic of our colourful drinks – even though it took about 20 minutes for the family in the background to stop taking selfies and move out the way of our shot! As it got dark outside, table lamps were brought round to us which made the space feel a lot cosier, and was cool to see London all lit up from such a great height. If you had around a bajillion pounds, I thought the space would be such a good wedding party venue, but more realistically it’s such a great place to go for a date night. There’s also a restaurant, which would have been lovely to try out, but for now I think an £11 cocktail is as far as my budget will go! 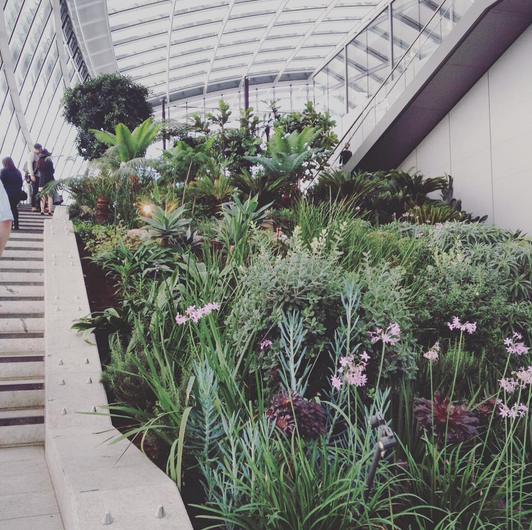