On Wednesday me and the boy celebrated our one year anniversary! Soppy I know, but to me every little milestone matters (and who doesn’t want an excuse to celebrate?!) B had the day off but sadly I had to go to work, so we planned to wake up early, drink tea in bed and open cards and pressies. Due to my excitement the morning actually went: wake up randomly at SIX am, then me half-sleepily singing “happy anniversary to us” to the tune of ‘Happy Birthday'(?), fall back asleep, then wake up at 7, for the original plan to take place. Sigh. SO.. I went first and opened up a hand made card B had made for me which was amazing! We met on Tinder – I know, right – and he designed a card with our original Tinder profile pics on, with the brief story of our year together in the style of Tinder buttons! It was incredible and such a good idea. Very clever. Then I opened a beautiful package from Fawn And Rose, which revealed a gorge necklace made up of my absolute fave colours – copper and mint! It really is lovely, and oddly enough checking my Etsy ‘favourites’ later in the day I realised I had favourited a really similar necklace from the same company a few months before hand. Crazy!

My gifts to B were more silly, with a Lego brick lunchbox which I thought was super cool (but think B may just use it as a storage box!), a forest green beanie from Plain Bear, a company whose stall we saw and loved at Spittlefields a while ago, and something I’ve been working on for a while.. a scrap book of our first year. Since the start I have been collecting up notes we’ve written, postcards and momento’s from places we’ve been, wrist bands and flyers to events we have attended, and place names from weddings we’ve been guests at..(deep breath) with this book in mind to fill. I just thought it would be fun to look back on and reminisce, as well as a place to bung all the future crap we collect! 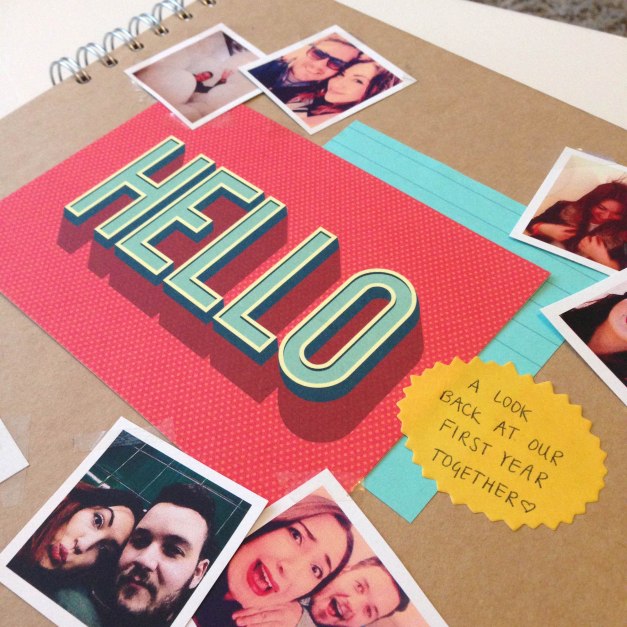 I think we had a good haul of anniversary gifts altogether, and the style of my necklace definitely links to lots of lovely home ware and furnishings I’ve recently seen on Pinterest including many duvet covers of which if I were to own, I would never moan about making the bed again. Below is just a few bits I currently have my eye on.

By the time this post is live, we would have been to Amsterdam and back to celebrate,
so many an Amsterdam post are on their way…