Oh hay, let me just introduce you to my new musical idol, Sia. My friend showed me the video to her single ‘Chandelier’ and ever since, I’ve been obsessed. After years of collaborating and song writing for such people as NeYo, Rihanna, Britney and Madonna, as well as being in multiple bands over the years, Sia is finally in the global spotlight for her own album ‘1000 forms of Fear’.

What really brought her to people’s attention is the music video for Chandelier… Sia doesn’t actually star in her own video – instead 11 year old Maddie Ziegler is the star, portraying some seriously amazing contemporary dance – as well as some odd eye twitching moves. Maddie is of the US show ‘Dance Mom’s’ fame, and is seriously talented. The creepy run down apartment setting of the video teamed with the eery dance moves and almost sexualised nature, Maddie in this video really reminds me of Natalie Portman in one of my all time favourite films Leon. Dressed in a (controversial) nude leotard, heavy makeup and a blonde wig, the video has apparently caused a bit of an uproar in America, meaning that when Maddie reenacted the video along Sia on the Ellen show, she was forced to wear some granny-esc style purple knickers over the nude leotard..?!

Whilst on her promotional tour Sia has chosen not to show her face to the audience she’s performing to, facing the corner while on the Ellen Show, and not even turning around to face interviewers. I personally think this is just a gimmick, as if you type ‘Sia’ into google, numerous photographs of her smiling face pop up – so it’s hardly a mystery who she is..? Her blonde choppy hair has become her trademark – with Maddie wearing a wig of the same style in the Chandelier video, as well as Sia’s album purely displaying the lonely wig on the front cover. 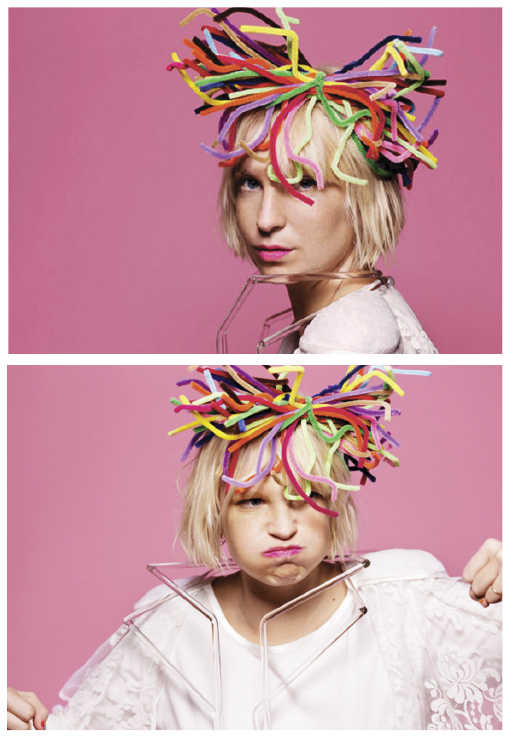 After listening to her album, I can say that she is seriously talented. I tend to get fixated on albums, listening to them in order on repeat for a few solid weeks, and after a week of ‘1000 forms of Fear’, I am no where near sick of it! And although it is sometimes hard to make out the words due to Sia’s unique voice, I am happy to mumble along regardless. Watch the video here.