After the Cereal Killer Café a couple of weeks ago, we went on a mooch around East London.. mostly spending time in Spitalfields and Brick Lane. We also headed to Box Park, just by Shoreditch station, which is home to many awesome little shops. The first place we went visited was ‘Dum Dums Donutterie’, which as you can imagine from the name, was a mouth watering donut bakery. All the donuts are freshly baked and apparently significantly low fat (this could be an excuse to inhale more than one) and Dum Dums even sell the sort after cronut amongst their collection. With so much choice it was hard to choose which donut to eat, but me and the boy ended up sharing a coconut & strawberry cronut.. personally I found it all too much and only had maybe two bites (I know – what’s wrong with me?!) but he was happy to finish it off!

I have a real love for those quirky kind of shops, the ones where they sell nothing you need but you still have an urge to buy something. That’s why I love shopping in Brighton so much. The Lanes have so many of them, where you’ll happily hand over cash for the crazy robot-jesus figurine that you thought was so silly and cool, but on reflection at home you wonder what you were thinking.. Well Box Park has a couple of silly design shops which I just adored along these lines. One called ‘The Gift Box’ could have easily taken all my money if I was less controlled! They had tons of cool stuff such as lamps shaped like burgers and woodland animals (who doesn’t need one of these?!), lots of cute greetings cards, and lovely illustrated cushions (many that I have seen sold on OhhDeer.com). Another, ‘Tusch and Egon’ sold giant lego shaped boxes which could be used for storage, or would be cute to use as lunch boxes. 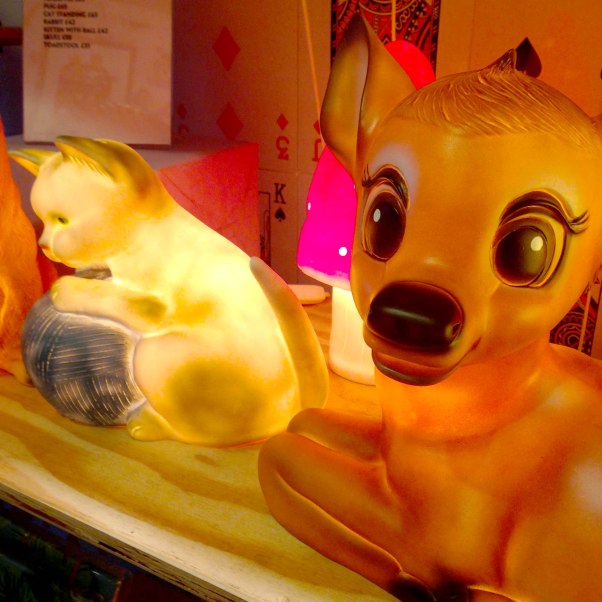 Another shop I enjoyed was the ‘Hype’ store. Sadly I despise clothing lines that feel the need to place their branding ALL over their products – ya know just incase you forgot where you bought it – but Hype is currently doing a Simpsons collab, and as a HUGE Simpsons fan this was obviously of interest to me! The whole shop was kitted out with Simpsons-esc decor.. with Homer and donut patterned flooring, and giant Simpsons vinyls. Some of the collection would have been wearable if they didn’t have giant ‘Hype’ logos on the front… shame!